Millions more people voted for a woman than for a man in the 2016 presidential election. That incontrovertible truth must be repeated each time we discuss the outcome.

Those millions of voters have been disenfranchised by the electoral college, a function perfect for man-splaining. You see, dear, the founders, in their infinite wisdom, foresaw a day when the majority would be wrong and have to be stopped. The founders? You mean those slave-owning white males. Perhaps their wisdom wasn’t infinite.

I’m intrigued and dismayed by how deeply gender-fied this process has become. There are more women in America than men. Our culture teaches girls to accept and compromise, while boys are taught to fight. Now, the Republicans — the boys — want the Democrats — the girls — to behave. Be quiet, darling, you lost fair and square. But we didn’t lose. Millions more people voted for a woman than a man in 2016.

This election was the next step in a progressive, female-led agenda. A minority opposed that agenda. Progressives won. Rarely do losers lecture winners. Now, we are expected to sit in the corner and review where we went wrong. Perhaps we went wrong in believing the system was just. Perhaps we continue to go wrong in accepting the way it worked. You know “the boys” would not (did not).

Nate Cohn of the New York Times estimates that when every vote is tallied, some 63.4 million Americans will have voted for Clinton and 61.2 million for Trump. That means Clinton will have turned out more supporters than any presidential candidate in history except for Obama in 2008 and 2012. And as David Wasserman of Cook Political Report notes, the total vote count—including third-party votes—has already crossed 127 million, and will “easily beat” the 129 million total from 2012. The idea that voters stayed home in 2016 because they hated Donald Trump and Hillary Clinton is a myth. …

[W]hen assessing Clinton’s candidacy, it does seem worth noting that she got more votes than George W. Bush did in 2004, than John McCain did in 2008, than Mitt Romney did in 2012, and than Donald Trump did in 2016.

‘Prediction professor’ who called Trump’s big win also made another forecast: Trump will be impeached – The Washington Post

At the end of our September conversation, Lichtman made another call: That if elected, Trump would eventually be impeached by a Republican Congress that would prefer a President Mike Pence — someone who establishment Republicans know and trust.

“I’m going to make another prediction,” he said. “This one is not based on a system, it’s just my gut. They don’t want Trump as president, because they can’t control him. He’s unpredictable. They’d love to have Pence — an absolutely down the line, conservative, controllable Republican. And I’m quite certain Trump will give someone grounds for impeachment, either by doing something that endangers national security or because it helps his pocketbook.”

So while Republican voters clearly came home before Nov. 8 — network exit polls show 90 percent of GOP voters cast ballots for Trump — it’s less clear that the party leadership is on board. (Lichtman actually isn’t the only person to predict a Trump impeachment; this morning, the New York Times’s David Brooks suggested a Trump impeachment or resignation was “probably” in the cards sometime within the next year.)

We’re told to accept the results of an election in which 7 million more people voted against Trump than for him. We’re told to sit down by people who were prepared to take to the street with guns if their man didn’t win. Trump said in 2012 that the Electoral College is ridiculous and should not install the guy with fewer votes. This year, he said the election was rigged. Maybe he was right. How does a guy hated by numerous Republicans, including the entire state of Utah, get more votes than Romney or DUHbya. How? Setting aside the chance the vote was diddled (notice how he played everyone into insisting that wasn’t possible), he lost the popular vote. I’ll graciously accept him when the radical wrong / alt-smart kisses Obama’s ass. They are a dwindling minority that should not impose on us an incompetent narcissist for president at this crucial moment.

Don’t *save* your energy – spend it putting pressure on the Electoral College and your state legislature.

The following is from an unidentified writer. I dispute “the people who won” – their candidate got fewer votes. 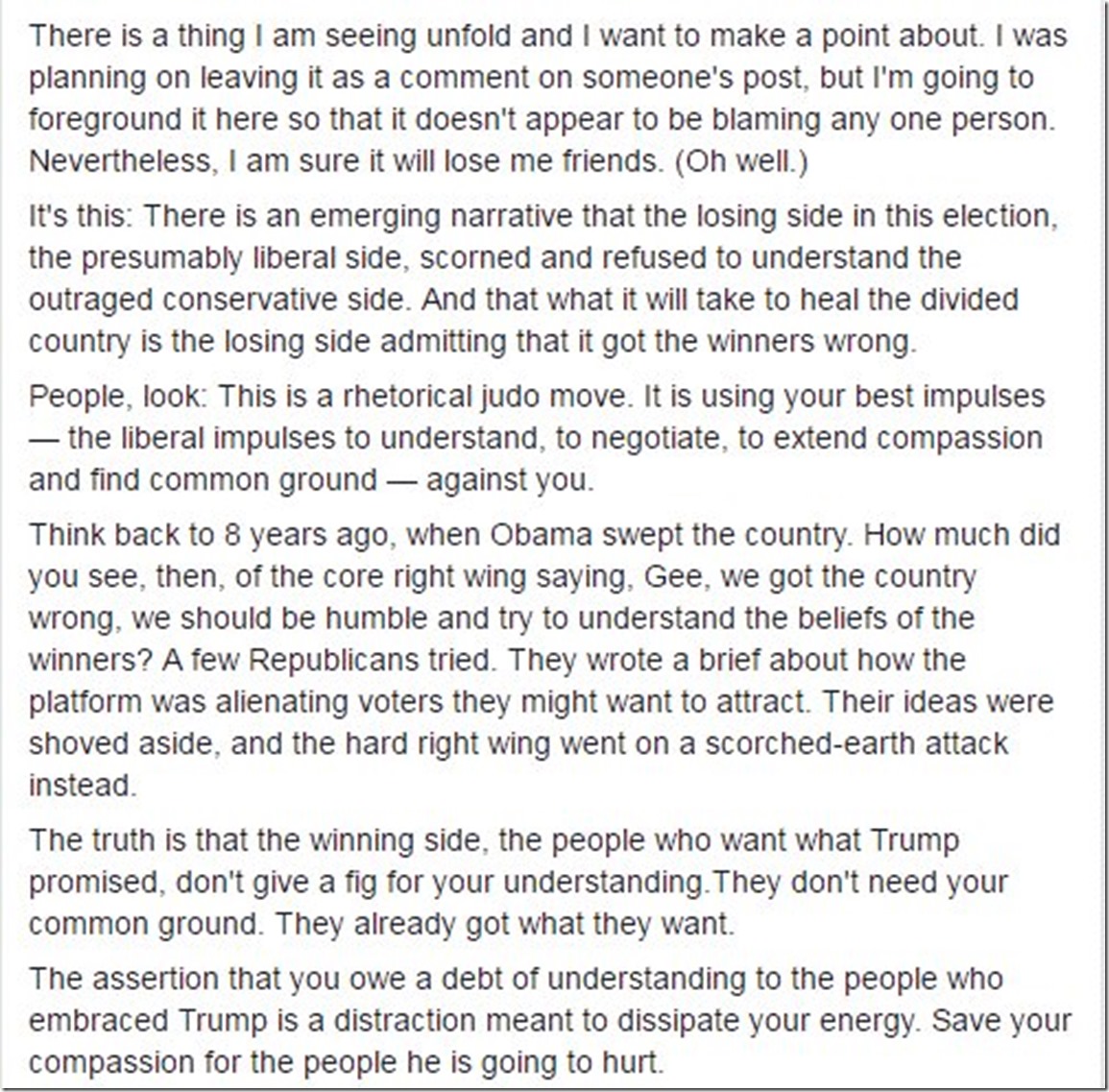 The national press is likely to be among the first institutional victims of Trumpism. There is no law that requires the presidential administration to hold daily briefings, none that guarantees media access to the White House. Many journalists may soon face a dilemma long familiar to those of us who have worked under autocracies: fall in line or forfeit access. There is no good solution (even if there is a right answer), for journalism is difficult and sometimes impossible without access to information.

The power of the investigative press—whose adherence to fact has already been severely challenged by the conspiracy-minded, lie-spinning Trump campaign—will grow weaker. The world will grow murkier. …

Despite losing the popular vote, Trump has secured as much power as any American leader in recent history. The Republican Party controls both houses of Congress. There is a vacancy on the Supreme Court. The country is at war ….

Republican politicians have fallen into line. Conservative pundits who broke ranks during the campaign will return to the fold. Democrats in Congress will begin to make the case for cooperation, for the sake of getting anything done—or at least, they will say, minimizing the damage. 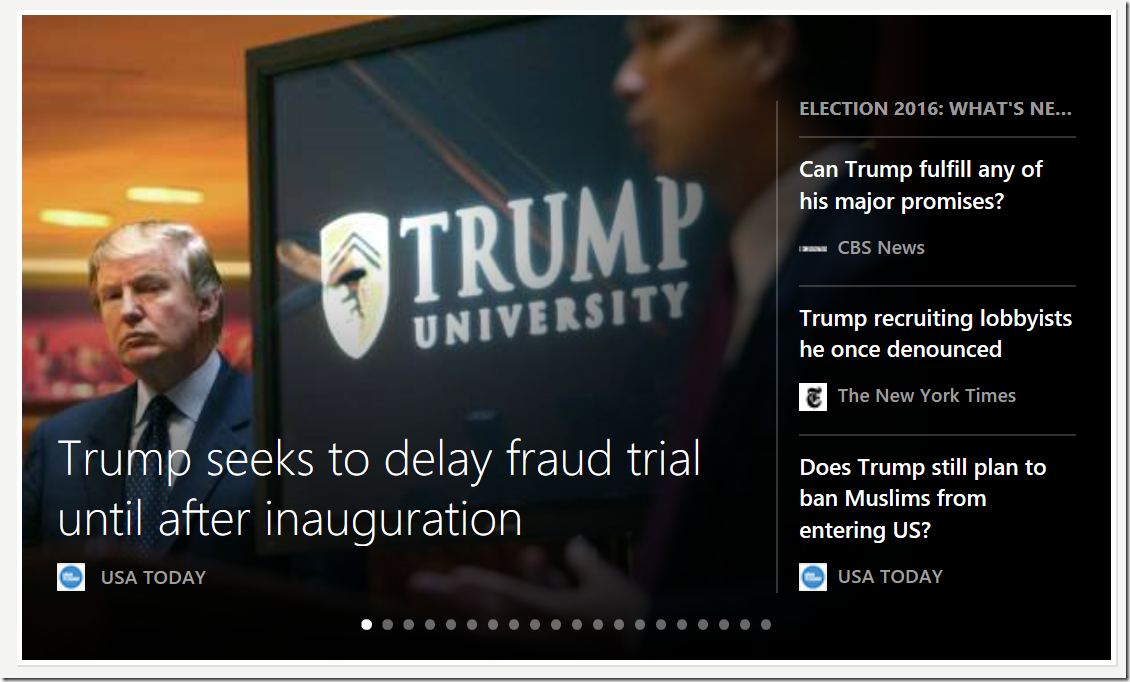 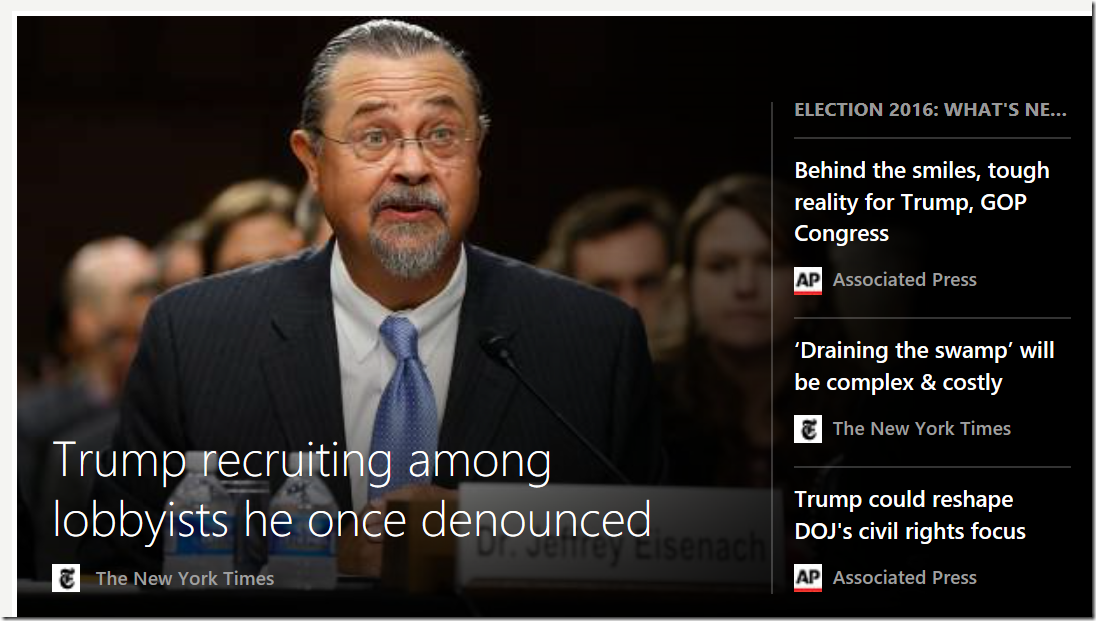