Either could have what they want now
but these are little improvements
they can look forward to
as if one day
the end of the world
could have a bright side
like that trip to Europe
after the dog dies. mjh

Ha-ha, kidding, sort of. We’ve lived in our house for about 25 years. Most of that time, we’ve each wanted one change to our kitchen. Merri wanted a dishwasher. I wanted a pass-through connecting the dining room and kitchen. Over the years, we’ve painted, replaced the floor, and made other mostly minor changes. The biggest changes had been new windows and a new glass door following a burglary a couple of years ago.

Earlier this year, we started working with our neighbor, Deirdre, an architect, who drew up a model redesign and discussed many options with us. With Deirdre’s drawings in hand, we began talking to contractors a couple of months ago. Most contractors failed to follow-up. We chose Two Dads Construction because Conrad Murphy and Sean Rubeo impressed us in many ways. We could not have gotten this project done so quickly without them. They are very good.

Tip #3: You can have whatever you want, if you know what you want. Don’t be afraid to ask for advice and opinions or to ignore them.

I’ll spare you the day-to-day recap, although I’ll answer any questions. In just two weeks’ time, the wall between the dining room and kitchen is gone and new cabinets form an L-shaped peninsula. The space is large, airy, and bright, just as we wished. The cabinets were hand-made by Jerry, who worked with meticulous care, even after installation. (We could not have gotten pre-fab cabinets as quickly as Jerry made ours.) We left most of the old cabinets along one wall – it was unconscionable to scrap them –  but we replaced the counter and sink on that wall, as well as added the new dishwasher. The counter is Parys Cambria manufactured quartz fashioned by Tom Sawyer Enterprises; Will was very helpful time and again.

Each day had its delights, beyond the good-natured interaction with everyone who worked on the project. When the wall came down the first day, we marveled at the huge space. We suddenly had an alignment of four doorways, just like Chaco. Installation of the cabinets the following week redefined the space without closing it in. Paint and lighting (by Antonio, Five Star Electric) made it all more elegant than we expected. Roy installed the new cork flooring (from Kathy, Southwest Green Building Center) two weeks after we began. As expected, that added warmth to it all. (Marmoleum was our second choice.) The counters came near the end, jewels in the crown.

We managed the short time without a kitchen. We put the microwave in the living room; we ate out and carried out a bit more frequently than usual. And the grill was handy on weekends. Fortunately, we had access to the fridge and kitchen sink each night. Conrad and Sean cleaned up each day.

Tip #4: Establish a clear budget. Try not to spend more than twice as much.

As fast and smoothly as this went, I was exhausted, even fed-up, after just two weeks. I can’t imagine how people endure longer projects. Every morning, before 8am, I had to move our vehicles out of the way, then back, later. Nearly every day, we made multiple trips to Lowe’s and Home Depot, sometimes late at night. We spent hours online comparing products. We were drawn to the most expensive or the discontinued. I became disgusted by the mind-numbing array of available items. How can there be 100 different dishwashers, etc.? Who buys all this stuff? Are there tens of thousands of projects like ours going on simultaneously? If you spend any time in a store, it is hard to believe the economy is sour.

We were within half a day of being done exactly 3 weeks after demolition. I should say, we were 4 inches from being done. Although we had taken great care to buy a sink narrow enough (front to back) for the old cabinets, which were built in place, our sink was too wide for the available space. Sadder still, the counter was cut for that too-wide sink. Imagine the pall that fell over everyone when we realized this sink and this counter could not be made to work. By chance, Peter, one of the owners of the counter company, was there and he quickly admitted his templater should have noted the width of the cabinet under the box. (Granted, we already had the too-wide sink by then, but we could have procured the right one two weeks ago.) Could we widen the cabinet? Then there wouldn’t have been support for the heavy sink or space for the dishwasher. Fortunately, the other half of that slab was leftover, enough for a second 10’ x 25” counter. We scrambled for a suitable sink, which we bought from Loreen at Perry Supply / Golden Eagle Design. (Bless her.) Early the next morning, Will built a template by hand, the old-fashioned way, instead of the high tech way from the previous go-around. With luck, that counter and sink will be installed late Friday. But, we’ll have to wait until next week for the plumber, Daryl (Whitney Plumbing Company), to get back to us. A week without a sink is a real drag (we were fortunate to have a sink the rest of the project); a week added to the project is disappointing. However, we have cooked two meals and sat at our counter several times in the past 24 hours and love what we see so far.

We learned a lot in this process. Each area has its own technical terms. Demi-bullnose vs no-drip bullnose (not available in quartz – 2cm or 3cm?). A reducer, not a transition. That’s not stainless steel, it’s brushed chrome; we want nickel. Drop-in (or is it self-sealing?) vs undermount. Semi-gloss vs satin. That will really make it pop / recede / warmer / cooler / come together. Xenon isn’t as hot as halogen. VOCs, LEDs, CASH. Ironically, we may never use that knowledge again.

We were lucky everything came together so quickly (but for the counter glitch). That wouldn’t have been possible without the right people involved as well as at least one of us available every step of the way. We made lots of decisions quickly, changed many of those more than once. We joke that nothing ended up the way we first decided, but, in fact, the finished room is a lot like Deirdre’s original drawings. After all, learning literally changes one’s mind. We’re delighted with the results. Now, we have to enter shopaholic treatment. I’ll search Amazon for something appropriate. Right after one more trip to Lowe’s. 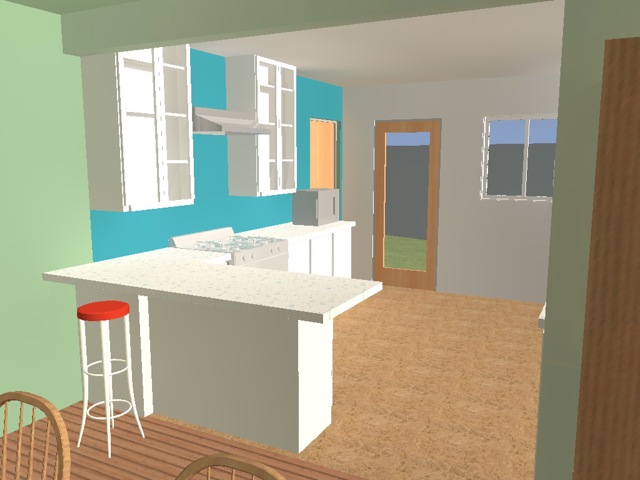