The electoral college is a disaster for a democracy. Donald J. Trump Verified account ?@realDonaldTrump 6 Nov 2012

We are calling on the Electors to ignore their states’ votes and cast their ballots for Secretary Clinton. Why?

Mr. Trump is unfit to serve. His scapegoating of so many Americans, and his impulsivity, bullying, lying, admitted history of sexual assault, and utter lack of experience make him a danger to the Republic.

Secretary Clinton WON THE POPULAR VOTE and should be President.

The idea of electors reversing their vote is rarely discussed — and was most recently bandied about after the incredibly close 2000 election in which George Bush narrowly beat Al Gore. And electors going “faithless” is exceedingly rare.

The electoral college does not vote until December 19th. We have 40 days.

To be delivered to Electors of the Electoral College

Affecting FUTURE elections, not this one:

If states and territories totaling at least 270 electoral votes pass laws joining the National Popular Vote Compact, then the next presidential election will be determined by the winner of the national popular vote. We are already up to 165.

How did we let Trump get away with this? He lied about his reasons but ultimately there was no threat that could compel him to release his tax returns. There is ONE threat now: Trump cannot become President without releasing his tax returns. Simple. Clear. No paperwork, no job.

Trump will ignore this or tweet something ridiculous in response. His followers will rage at this temerity even though they harped endlessly on emails and unproved corruption. But someone can fix this.

Until this election cycle, there were still a few Republicans who put the nation ahead of their own interests. You can subpoena these records immediately. No paperwork, no job.

There are other avenues:

We have a right to know before he takes power. No paperwork, no job.

Trump never released his tax returns and lied about the reason.

Trump is the self-claimed King of Debt — who does he owe money to?

Trump refuses to put his companies in blind trust. His dimwitted children will run things for him, checking with him on every step.

Trump has numerous lawsuits pending (as defendant and plaintiff).

Every action Trump takes will put him in a conflict of interest but he says you can trust him.

Even the GOP will end up impeaching this crook. Let’s spare the nation the ordeal, support the majority that voted against him, and stop him at the Electoral College, before Inauguration Day.

Trump opposes freedom of the press, a constitutional right. He will NOT defend the constitution.

Most people are confused and frustrated by the Electoral College, including people on the left and the right. Some are working to abolish it, which would require a constitutional amendment. Others are trying to finesse it with compacts to distribute electors according to the popular vote (this doesn’t require an amendment but might be unenforceable). We can’t wait to fix the problem. There is an immediate solution.

While some states require their electors to vote for the majority within the state, not all do. It is possible for conscientious electors to recognize that this election subverts democracy (Trump lost by 6 million votes) and puts in the White House a man who ignores all rules. Help us, Electors, you’re our last hope. 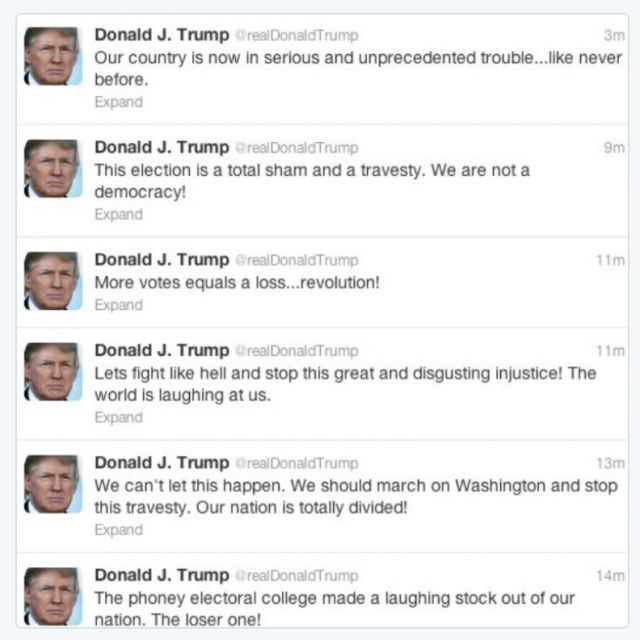 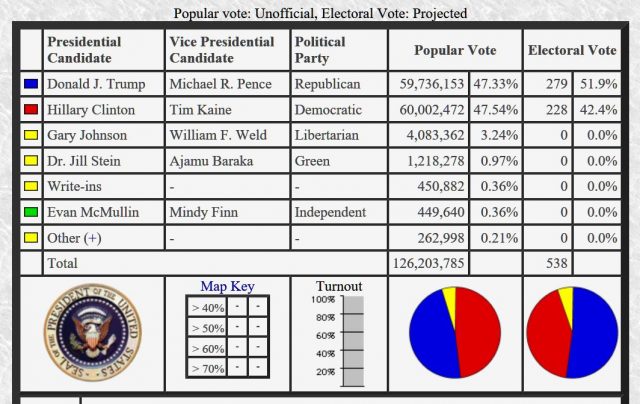 A majority of Americans voted for progress 11/8/2016. Instead, Republicans seized power in every branch of government, including the Supreme Court, which will haunt us for 30 years.

I survived Raygun and his pompous supporters who hurled “liberal” as an insult. I survived the profoundly stupid and arrogant DUHbya, whose Daddy’s supreme court installed. We will survive the even worse Trump and his thugs. I’m sickest that we have to watch his arrogant, classless offspring for 4 years.

Ironically, we are now trapped in an abusive relationship. Bullies rule. Why are you hitting yourself, Amerika?