After I heard that George Duhbya Bush was coming to Albuquerque again, I scoured the news for information. I even checked the White House website. All I could find was he would be here ”mid-morning” on Friday, speaking in front of his usual hand-picked crowd. Supposedly, his speech would not be a campaign speech (therefore, you and I paid for it), but a ”policy” speech on homeownership. No one mentioned where he would speak.

Thursday, I wrote two reporters asking if they knew the time or place of his visit. One said ”no,” the other said ”we’re not supposed to say,” explaining that in these times one can’t be too careful. Too careful that someone will protest the president. Bush is a coward and is spreading his fear among the people.

Thursday afternoon, I climbed on my roof and spread two tarps. On one, I painted a big white W with a red circle and slash (No Duhbya). On the other, I painted ”Dump Bush.” I also painted the w-slash on two trash bags.

Friday morning, I filled some helium balloons and stuffed them in the trash bag and attached others to a line attached to the bag. Up on the roof, I let my protest go, up into the air. I’m beginning to realize that helium is weak and balloons troublesome, especially in any breeze (and this is spring in New Mexico, where breeze is an understatement). Eventually, a few neighbors came out and called their support to me. A few people stared as they drove by.

Meanwhile, the news covered the president’s arrival and mentioned a few protestors in a ”free speech zone.” Welcome to what used to be America. mjh

This Is Your Proselytizer Speaking

as if the stick was in the hands of Elmer Gantry, not Chuck Yeager. The American Airlines pilot, Roger Findiesen, suggested that

Christian passengers skip the movie and instead attest to their faith by raising their hands in the air. The master of the ship then

invited an interfaith dialogue between the Christians and the nonbelievers strapped in their seats.

days most people are looking overseas and worrying about Muslims. Not me, because I’m worried about the religious fanatics right here at

Unfortunately, in the last 20 years, religious fanatics have come to believe their faith entitles them — even requires them — to

interfere in everyone else’s life. Isn’t it enough that we non-believers are going to hell (you say)? Must we have hell-on-earth in the

company of bible thumpers, the painfully self-righteous and sanctimonious? These Christian Radicals are on jihad, claiming the one true

way and prepared to kill for their faith (something I can’t see Jesus approving).

Little Red Book. There wasn’t the tiniest doubt that it contained all the Truth and Wisdom in the world. I know devout bible-literalists

will blanch at the comparison. But, consider, the followers of Mao would be just as shocked. So it is with fanatics.

we are being assaulted and threatened by these Born-again Believers who believe American is ”a Christian nation.” Some of their

thoughtless intrusions are almost laughable, but something worse is in the works. Every day, the most radical and dangerously devout,

freedom to choose, not just whether to have children but who to love and marry; our freedom from state-sponsored religion (a form of

dictatorship); our freedom to protest.

Am I repudiating all who sincerely believe in god? No. By all means, live your life in

loving compassion and peace; if it takes a god to inspire (or threaten) you, so be it. Believe what you will, share your beliefs with

your congregation. Work to change the world, through your own good example. But remember, most of us have different views and all of us

want freedom from oppression, no matter how well intended. mjh

Though you didn’t see it on the news and read almost nothing about it in print, there were protesters in Roswell confronting George Bush. We were there.

My friend Jas. proposed the trip to Roswell. He could not stand Bush bringing his fear & lies to New Mexico without any opposition. Bush, in a move taken from Cheney’s agenda, spoke to a stacked audience of military cadets bused into one of the most conservative towns in New Mexico — no worries about dissent or open opposition (isn’t the bully brave).

So, we took to the road in my camper the night before. The drive down was surreal as we passed through dense fog, past trees white with frost. A Trupact container drove by, loaded with radioactive waste (our own Pete Domenici, who introduced the president the next day, supports weaker containers, fewer inspections, more shipments).

We arrived outside of Roswell after midnight and camped off a dirt road. We snuggled in sleeping bags and set the alarm.

The next morning, we drove into town. The main street was barricaded a few blocks either side of the convention center, but the side streets were open. We picked a spot a block east of the convention center, not far from the media vehicles and just below the sightline of a half a dozen snipers. Out of the camper, we pulled Jas’ creation: a Mylar banner suspended from helium balloons painted with the message “Send Bush to Mars.” We had considered stronger messages but we both believe that humor will strip the tyrant of his veneer. It was a timely message fitting Roswell, New Mexico. 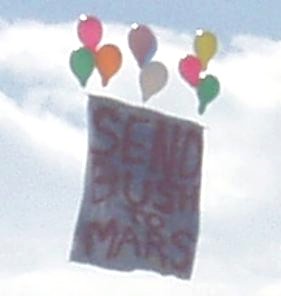 As the balloons warmed, the banner lifted slowly and began to drift to the south, paralleling the main drag. We know some people on the street saw it. There can be no doubt the snipers saw it as did the helicopter pilot. We took a couple of pictures and started to leave town.

Ah, but we couldn’t just go, we had to turn back and relish sticking our thumb in Bush’s eye. We watched the banner at about sniper height drift a couple of blocks before catching on a tree. There it hung, the balloons tugging, sparkling in the sunlight.

What happened next was more serendipitous.

As we headed out of town, we stopped at the UFO Museum. All through the museum, Bush’s speech blared, much like small-town Germany 65 years ago. It was ironic to wander through a ‘museum’ that documents people’s gullibility and mistrust of government while listening to Bush. In the gift shop, a patron spoke of ”incredible things spoken of by credible people” — what, ”aliens” or ”the war on terrorism”?

It turns out we were in the museum exactly the right amount of time. As we headed out 380, we stopped at a gas station. While we gassed up, a state trooper blocked the intersection and people began to line up along what proved to be the president’s route to the airport. We never could have planned to be sitting so close. What to do? Too big a gesture, too early, would bring the cops or Bush loyalists down on us. If only we had another banner — though the materials were close at hand (and, ironically, we ended up having more time than we realized). The best I could do was draw a small sign: Patriot Act is UnAmerican.

So, after braying to the young men he will send off to die, after phoning the fanatic anti-choice crowd who powers him, after laughing with the restaurant workers and patrons he is robbing, POTUS drove past hundreds of waving loyalists and probably never saw the man in the yellow shirt holding his sign high with a tear in his eye.

It doesn’t matter. What matters is that you speak out, that you protest the direction this president is dragging the entire world. No one can stop him but all of us. Get active! mjh

proposal for artwork in the Uptown Area.

On the south side of the Louisiana overpass, let’s erect a larger than life Coronado en

la Entrada crossing the Rio Grande (represented by the concrete ditch down the middle of I-40). Enjoy the irony that Coronado will never

Before you get out your hacksaws, wait! Look to the North. Here we will place some representation of the Pueblo

peoples (no, not a slot machine). I leave it to the many fine Native American artists in New Mexico to decide what is fitting. I do

recommend the Marriott acquire a Chacoan facade, like the Homeland Court downtown (Bless the Homeland!).

perpetually represent the gulf between the First Immigrants, for even the Indians came from somewhere else — though I have no cognitive

dissonance from the notion that they came from someplace else AND have always been here (I feel that way myself).

Anglos (not to mention Blacks, Asians, everyone else — which is par for the course)? We already have our memorial in the two malls,

where we seek new bargains and homogeneity. I can’t wait until they build more stores between the two malls, finally putting to use that

our age would be large digital screens which would perpetually flash advertisements and security alerts. We’ll take as our inspiration

the rape of the National Mall in DC by NFL and Pepsi, featuring Brittany Spears, stripped of all decency (huh?). Maybe these screens

could occasionally show photos of the Sandias, which soon will not be visible from Uptown. mjh

City residents had a chance to weigh in on

tall-by-64-feet-wide cone shapes would, among other things, allow rain to be captured and used to water the landscape.

Everyone’s an art critic. The design for two Uptown sculptures

costing about $300,000 and resembling “giant coffee filters” or “urns” has already received some colorful criticism, and it has yet to be

the focal point of a public meeting.

ABQjournal: Letters to the Editor

the ideal, circa 1945. I don’t care if the project makes an arcane reference to the idea of “Uptown,” so long as it incorporates an

appropriate degree of complexity. At present moment, it strikes me as a “one liner” that has a $300,000 price tag.
JOSHUA ARNOLD

Arthur Alpert’s take on this:
Alpert’s Truth: I Become a Know-Nothing

Most mornings, I see him there, in the park. The old man drives up and walks to a bench, sunny or shady according to season. Every time, he pulls out a cigar, some slimmer, some fatter. He takes a moment to contemplate it, lights it, and settles into the bench.

I do not know his smoky musings. Done, he doesn’t linger. Back to his late-model car, back to the real world. Does he go home to his wife, or is she dead? Does he have children waiting for him? Or is it just an attendant at some senior center.

I do not know — we never speak. We know the timeline would be at risk for this Mark to speak with that Mark. Some things we must just wait for. mjh