of John Edwards as the Democrats Vice President will enrage the Republicans. He’s a Trial Lawyer, something they hate more than lesbian

socialist welfare mothers on dope. Trial Lawyers are THE enemy (because they hold businesses accountable to their customers and employees

— something the govenment doesn’t do anymore).

Edwards is the antithesis of corporate welfare. The Republicans will try to exploit

him as ”anti-business,” just like liberalism is ”anti-American” — a horrible lie.

Worse, Edwards is going to steal the

whole ‘optimism’ argument. No one is more optimistic than Edwards. Stand Edwards next to Cheney and pick the one who exudes confidence

And that’s why Cheney will withdraw and McCain will be Bush’s new choice for VP. If Cheney can’t let go of power and

Richard Romero accuses her of being.

”Heather was one of only three Republicans out of 220 to vote for the CIA cuts. It was a clear

break with the leadership and came on the heels of her strong words condemning the abuse of Iraqi prisoners by our military. With Romero

hammering her for being a tool of (House Majority Leader) Delay and the hard-core conservatives, she is clearly positioning herself so

when she calls herself an independent she will have the ammo to back up the claim,” analyzed a Washington politico close to the

Washington insiders say Heather may not run into trouble with her GOP bosses over her votes because, as one of them put

it, ”they may very well be providing her cover. Her vote was not needed on any of these measures. They know what she needs to put

Romero away and it would not be surprising if they are giving these votes their blessing. I also don’t think these votes will damage

her any with rank and file Republicans”

Whatever the case, Wilson knows that the Iraq war and the President are not awash in

popularity among swing voters in ABQ.She hopes her June declaration of independence will echo on the campaign trail come October forcing

Romero to dig deeper in explaining his rubber stamp argument. Should we call her ”Clever Heather?”

Three votes do not an independent make. mjh

The Australian: Cheney curses on Senate

After the photo shoot, Mr Cheney approached Leahy and protested the senator’s recent criticism of

Senator Leahy had reminded Mr Cheney that he had

once called Senator Leahy a bad Catholic, to which Mr Cheney responded either “fuck you” or “fuck yourself.”

let me say I have no problem with the word ”fuck.” I use it often and like the sound of it. I do have a problem with fucking

hypocrits, like the Radical Right which is so high and mighty.

Notice the incident began with Cheney approaching Leahy to bully him

about Halliburton. When Leahy brought up that Cheney had called him a ”bad Catholic,” Cheney said one of these (how can there be

fuck you
fuck off
go fuck yourself

(see what happens when we have American Ayatollahs?).

has been the Bush/Cheney message all along. mjh

The exchange occurred last Tuesday in the Senate, when

Senator Leahy to “fuck off” or “go fuck yourself”.

the Super Bowl any more, and now, they can’t watch C-Span any longer either! What is this country turning into? I just don’t fucking

get it. God I have to fine myself now! Shit! Oh that’s another fine for me! Damn!”

On the one hand, the media overreacts to emotion from politicians (consider the nonsense

over the Dean Scream). On the other hand, I saw Heather on TV and she was strangely strangled with emotion. I go with those who ask if

these same complainers are as outraged over near-naked cheerleaders and topless Sports Illustrated models, not to mention the rape of 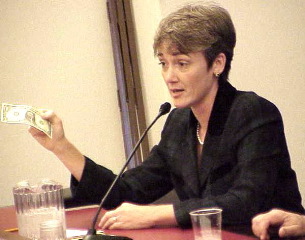 Cry us a river By Michael Henningsen and Sara Hiatt, Alibi

For a politician whose voting record clearly

defines the self-serving interests of corporate America (Viacom is one of her campaign contributors for Chrissakes, to the tune of

$4,500 since 1997) to get teary eyed and ridiculously dramatic over a risque halftime show–it was just a breast, after all, and 52

percent of us, including Wilson, have them–and not over the fact that she’s repeatedly voted against the interests of New Mexican

children and families she’s constantly feigning concern about is insulting to every resident of the state she supposedly represents.

Shut up, Heather. And do some good in Washington for a change! And besides, with American soldiers still dying in Iraq, aren’t

there bigger issues to cry about?

attack on Viacom, owner of CBS, and its president, Mel Karmazin, for airing the Janet Jackson strip act at the Super Bowl. The ABQ GOP

Congresswoman lit into Karmazin who was appearing before a congressional committee looking into the incident: “You knew what you were

doing. You improved your market share and lined your pockets!” Exclaimed Heather, in a near-tearful tirade over Janet’s bared breast.

The CBS Evening News, CNN and other media picked up her tongue-lashing.

lawmaker. But politically she picked safe turf. The Jackson act has been panned everywhere and the issue especially appeals to

and Colmes,’ have fallen flat. This time she was more animated, if a bit demagogic. But you don’t get to the U.S. Senate by hanging

back and I’m sure her future competitors eyed her new act and are laying plans for their own coming-out parties.

senate seat Wilson and her rivals could have their eyes on. Certainly, Sen. Domenici’s. But that’s not up until 2008. Sen. Jeff

Bingaman is up in 06′, but when asked recently by talk show host Mike Santullo if he definitely was seeking re-election, Jeff did not

say yes. I am sure it was just an oversight, wasn’t it Jeff? …

half-time show at the Super Bowl has drawn some return fire. Local wags, mostly Dems, ask pointedly if Heather is willing to put her

money where her mouth is and not put her campaign commercials on CBS affiliates? The wags also point out that the ABQ GOP

congresswoman has over $750,000 in her ever-growing campaign kitty, big chunks of it from the pharmaceutical industry which some of her

constituents find as profit-hungry as Viacom. Will she cease taking donations from that industry?

Of course, the answers are no and

no. Politicos can blast greedy corporations all they want, but when you look in their own backyard, they are just as money driven,

raising untold millions from just about anyone in their quest to get re-elected. Sounds a lot like trying to get those CBS

”ratings” Heather is in a tizzy about, doesn’t it?

And what of the politics of the nationally televised Wilson tongue-lashing?

One observer recalled the response Heather received when she was introduced by the Prez at a recent Roswell rally. She basically got no

response, while loud cheers were given to her fellow GOP Congressman Steve Pearce. Sure, Pearce represents the area, but, our observer

reflects, the silence had to be deafening for Heather. “Her hit on Viacom will resonate most with conservative southeast NM

Republicans who she would badly need to win any future GOP U.S. Senate primary against Pearce or another conservative,” said our

source who has worked at the highest levels of New Mexico politics. [mjh: Joe’s blog has THE photo, if you’ve been searching the Web

THE COST OF OUR DISTRICT
Congresswoman Heather Wilson has raised a total of $7,189,041 to keep her seat in congress.

Dean is McGovern. Or so some say. By this, they want to say Dean is too liberal for America. They also want to

predict a devastating loss for Dean and the Democrats.

This simpleminded analogy completely ignores that Dean isn’t nearly as

liberal as his enemies and earliest supporters want to believe. Still, let’s extend this analogy.

I hope you listened to part of the radio-only debate among the Democratic candidates. This was the

first of its kind in nearly 60 years: no cameras, no audience. The candidates sat around a table with the one moderator (NPR reporter

I have actually listened to some of the earlier debates on radio, but this was different. No one was playing to the

cameras; no one was applauding (or otherwise). There needs to be more of these type of events.

There was even humor, as when Dennis

Kucinich held up a pie chart, which Conan quipped was ineffective in radio. Kucinich smoothly replied that it would be effective if Dean

One thing the Bush administration has shown is savvy with visuals, from the silly little messages behind the President on up

to the flight-suit strut. Perhaps, in a radio debate with the eventual Democrat, we might finally hear this famously inarticulate man.

On the other hand, there’s something to be said for seeing Bush’s shifty eyes and blank looks. Let’s mute the TV (and those

unnecessary, domineering ‘moderators’) and listen hard to the radio for the truth.

NPR : Highlights of the NPR Debate

You can listen to different

segements of this two hour debate on the Web.